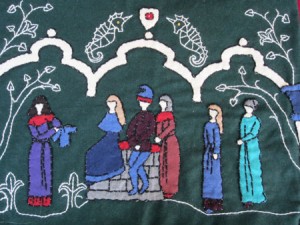 This is a partial list of classes that I have taught. If you see a class listed multiple times I am probably proofing the class to take it too a larger venue. For example I will test teach a class locally and then teach it at Atlantian University or Pennsic. Anglo-Saxon Ring Pouches is one of my favorite classes. It is the class most often requested to be taught, the children’s classes come in a close second for number of times I get asked to teach them.

Fiber Identification
Nobody told me they Grow so Fast