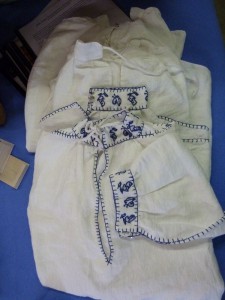 3 Shirts have proven to be 6 shirts, plus an other pair of pants in a smaller size. How could this be you asked, well I missed a red flag when I drafted my first pair of pants from the Tudor Child. That first pair of pants fit William to a T. The waist was perfect, the length looked about right. They had pockets and he liked them. A match made in heaven. Fortunately I mocked up the pattern for the doublet before I made one out of nice fabric. It was also a perfect fit, for my younger son Marshall. I should have known! I made a shirt for William. It looked about the correct size and was nicer than one I had made in the spring of 2013. He tried  it on and I thought it was fine. So I sewed 3 more shirts by hand. I even embroidered him a lovely shirt for court. Each seam was gone over 3 times (roll hem, blanket stitch and whip stitched.) I did not let him wear it for fear it would get stained before Kingdom Arts and Sciences. My friends teased me about, would he ever get to wear the shirt. Turns out he will not get to wear the shirt because it is the wrong size!!!

The first time he wore one of the new shirts was in February. It was a nice warm day. He tugged at the collar, fussed until he put on a doublet and complained later in the day that the shirt felt funny. Of course it felt funny, it was not a knit. I looked at the shirt later as he was undressing, at the end of the day and the neckline kept shifting backwards, like he had the shirt on backwards. I decided that the shoulder seams were too big. So I ripped apart the neckline. I do not make things to come apart easily and I hate alterations. Many bad words later the shirt was back together. It fit better but now the arms eye was too tight. I have spent a few weeks trying to figure out if taking out the sleeves and resetting them was worth it. Then I got a brilliant idea to try the shirt on William’s younger brother. It fits beautifully. More bad word were said. 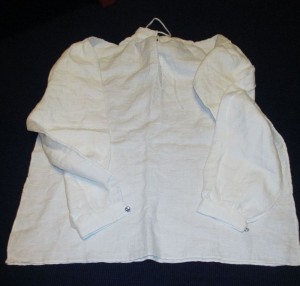 I have since made William an other shirt. I added 2 inches to just about all of the pieces and ran the project through the sewing machine. I wanted to know if that was the problem. Turns out it was. So either William outgrew the shirts in the time it took me to make them or all of the Tudor Child patterns are two sizes too small!

That brings me to the quandary of what do I do with 3 too small shirts. I can give them to Williams younger brother, but I cannot take Marshall to an event without pants. People would talk.

Time has passed since I wrote this page. William has 8 linen shirts, made in the spring of 2014. I made the originals in the Spring of 2013.  I checked the fit in the fall of 2013 and made two more shirts by hand. They never fit him correctly, however they fit his younger brother just fine.  Those 8 shirts have lasted through 2 Pennsics. It is my expectation that I will need to replace William’s wardrobe in the spring of 2016. I might get lucky and only need to make new shirts and a few doublets, as the pants seem to still fit.