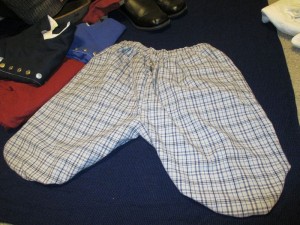 Breaching is the point in a boys life when he begins to wear pants. (I happily kept my children in G-63’s for about 6 or 7 years. So they are a little old to be breached.) I knew that 2014 was going to be a heavy sewing year, because we skipped Pennsic in 2013. That prophesy has proven true. My journey started with the words “Mom I want pants!” Like any normal parent I said “why and what kind?”  Despite the fact that my children have played in the SCA since birth they do not know the different terms for period clothing. The answer I received was not the fat pants like Daddy wears. I took that to mean Elizabethan pumpkin pants. It was around this time that I heard about the Tudor Child. A whole book written about children’s clothing. It has research, pictures and patterns. A match made in heaven. The first garment I made was a pair of pants with huge pockets.

More time has passed since that first pair of pants. I think they might be a little short. The next three sets of pants I make will probably be longer with a touch more space in the waist band. That way my son can get taller and I will not need to replace the pants as often. A word of warning on the Tudor Child patterns I think they run one to two sizes too small.

An update on pants. It is now 2016 and my oldest son can still wear the Tudor pants I made in the fall of 2014. I made the waist bands a bit loose and they are starting to get tight. I hope the garb will last this summer until Pennsic. I suspect that I will need to make more shirts and doublets. The youngest boy is eyeing the garb, which has pants! 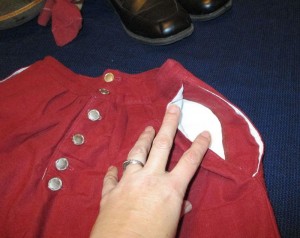 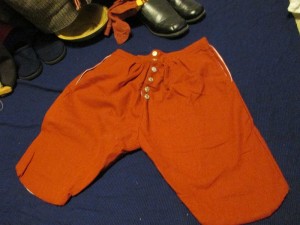